Tell us a bit about yourself and your business.

Bonnett’s has been dealing in used comics & magazines since 1939. Coming out of the Great Depression, the motto here is, “waste not, want not.” Books were added around WWII. Movies entered the picture with the VHS boom in the ’80s – fast-forward to disc-based movies today.

I (Kevin Bonnett) joined the family business, officially, in 1986, making this my 35th year… But, I actually began helping out many years before, between restaurant jobs, sheet metal work, & a short stint in the hospitality game. I nearly joined the Air Force, instead choosing to put the family business first.

Sci-fi is my favorite section, but the all-encompassing nature of those stories leads to having interests in just about every other genre and topic on the shelves!

What led to the decision to open the business and how long have you been in operation?

My paternal grandparents; Ruth (Guy) Bonnett & Harold “Hal” Murray Bonnett, opened the shop in 1939. Grandpa Harold was a published author of pulp-fiction detective stories – which is how he earned the money to open the bookstore.

Their son (our dad), Walter, took the reigns in the ’70s – after stints at acting, in the military, and as a teacher.

Dad handed it over to me and my brother, Greg in 2001. Greg had a stroke in 2016 & I’ve been keeping the doors open since, with an occasional assist from my son, Ian.

What do you enjoy about working in downtown Dayton?

Working downtown – with its convergence of conventions, industries, major local events, WPAFB, UD students, traveling bands, athletes, & arts performers – I get to meet a lot of interesting people. I like people but tend to be an introvert. The world comes to Dayton’s doors!

Tell us something about your business that may surprise people to learn.

“BONNETT’S BOOKS” can be seen, painted on the original plate glass window, behind our front wall sign.

We are the oldest continuously operating business in the Oregon District, except for Goodwill.

There’s a 1941 photo in the store, of Grandma Ruth at the counter. In that photo can be seen some drawings made by customers in 1940. Most of those drawings are still on display in the shop today!

Just a reminder…. We have a lot of cool toys on display, but these gifts from customers, friends, and family are not for sale; and any CDs or LPs are off limits as well. We’ll leave that biz to our friends at Mike’s Vintage Toys, Feathers Vintage, & Omega Music. 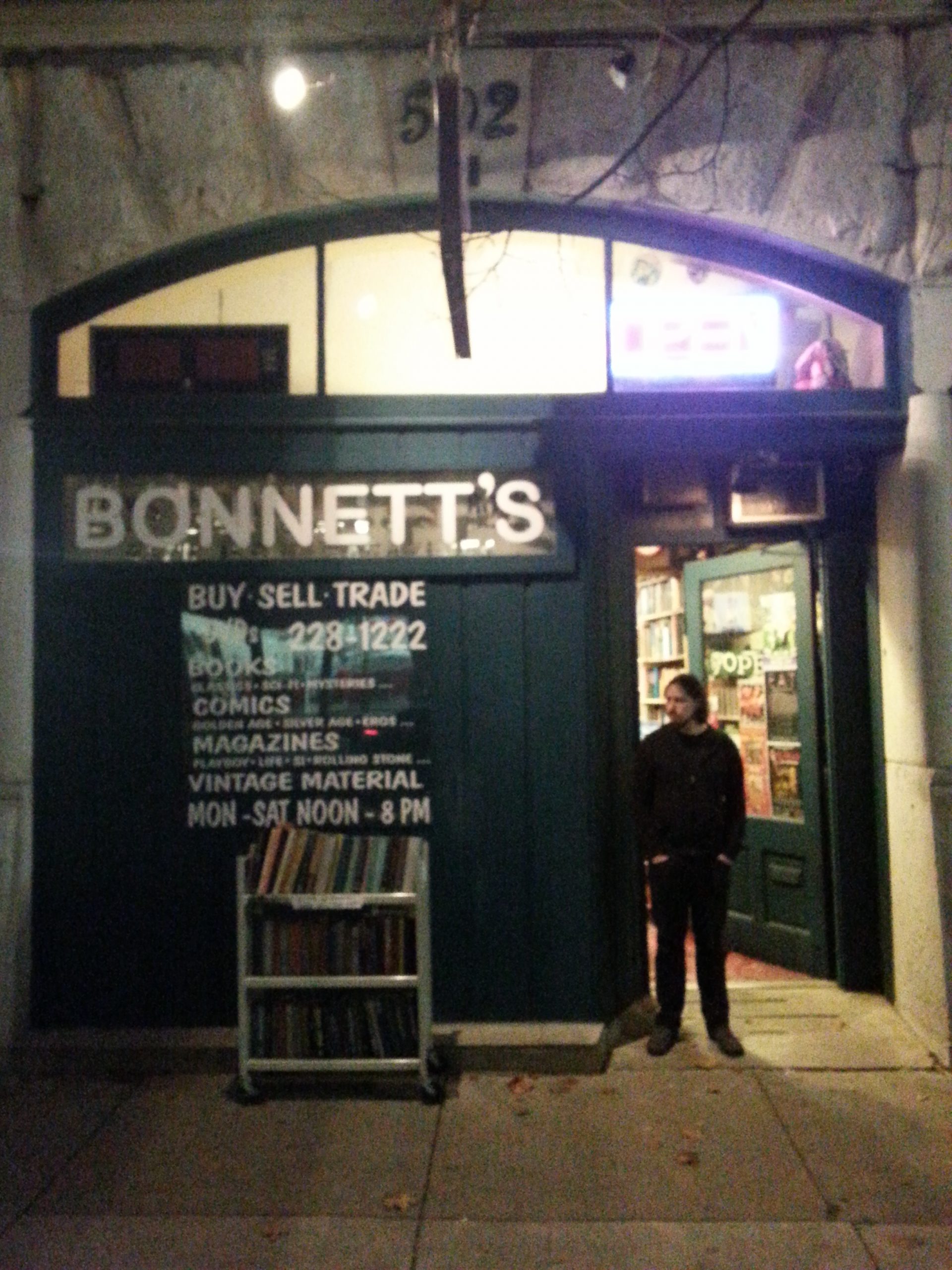 How is your business coping with the pandemic and how can people support you now?

CoViD-19 rules made me close the shop on the day after my birthday. I’ve never been a fan of selling online and the shop doesn’t have an online store. I continued working and showing off items on social media, hoping to do business by appointment. It was less successful than I’d hoped, but the store scraped by.

Seven weeks later we were allowed to reopen… Coincidentally, the date (May 12th) was Grandpa’s birthday! There was no way I’d miss that!

I’ve been requiring properly worn facial coverings and sanitizing since then without much trouble at all (knocking on wood). Business is understandably slow, but again, I’m muddling through and looking forward to the end of curfews and the return of awesome Dayton events like Gem City Comic Con!