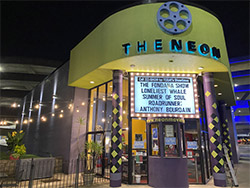 Downtown’s independent movie theater, The Neon, announced the end of its “Projecting Our Future” campaign, which surpassed its initial goal. The campaign had first targeted $85,000 to replace its two projectors and sound systems, but General Manager Jonathan McNeal was excited to announce, “Because we met our stretch goal, The Neon will be able to provide a bigger and better entertainment experience for our patrons.” Plans now include projectors with laser technology, which provide savings throughout the equipment’s lifespan and less energy consumption, in addition to an improved visual experience for moviegoers. The campaign was jumpstarted by a lead gift of $50,000 by the Jack W. and Sally D. Eichelberger Foundation. The remainder of the funding took just over four weeks to raise. McNeal explained, “The Neon has a strong, loyal base of supporters who believe in our mission. These supporters appreciate what we bring to the Dayton landscape, and they were eager to help. We couldn’t be more grateful.”