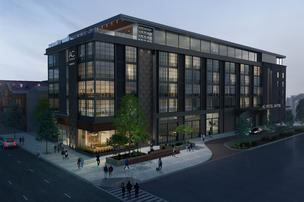 A Marriott-chain hotel, which will include a rooftop restaurant and event center, was announced as part of the multi-phase redevelopment project in the works by Crawford Hoying, who purchased the Mendelson’s property in downtown Dayton last fall. The 90,000-square-foot, 134-room, 6-story AC Hotel will be located on First Street, adjacent to the Dragons stadium and will include a lounge, media library, fitness center and meeting spaces. Crawford Hoying, in partnership with Woodard Development, has invested in development of new housing, offices, restaurants, hotel rooms and other amenities in the area around the ballpark. Developers told local news outlets construction on the project could begin as early as March.