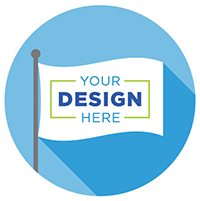 As Dayton continues its reinvention and renewal, local leaders are seeking a new flag to represent a changing city and community looking to the future. Dayton’s current flag has been in use since 1958, and many feel that its imagery has become dated and does not reflect the current age or our community’s diversity. The current flag depicts an airplane and a gear – but Dayton, over the last year, has shown it is about more than planes and manufacturing. We are innovative, resilient, and diverse people who deserve a symbol that shows who we are now and who we look to be. The City of Dayton and several partners are working together to re-imagine and redesign the Dayton flag to more closely align the symbol with the community it represents. The new flag is slated to be unveiled in 2020, as Dayton looks to the next decade.

What do YOU think should be represented on the Dayton flag? The City has launched a two month, open submission process. Anyone, regardless of whether they live in Dayton or not, can enter a submission. Designers are encouraged to submit up to three unique designs that follow the rules of flag design and incorporate the color palette and selected themes/values. The deadline for submissions is November 30. Find more details, including design guidelines, at www.daytonohio.gov/flag