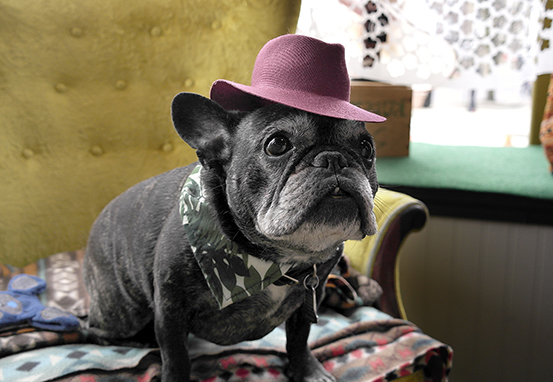 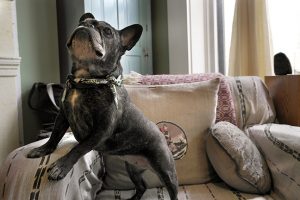 I’ve lived in the city basically my whole life. My Humans, Amelia O’Dowd and Brian Eastman, and I moved Dayton in 2008. I was a little baby puppy, so I don’t really remember it too well. But on our very first night at Dayton Towers (where we were living while the humans looked for a house to buy), we were in the yard when the fireflies came out. It was magical, and mom decided immediately that we were going to be happy here. Now we live in a house in the Oregon District. It’s a big, old brick house with a fireplace where I warm my tush in the winter and wood floors that I slide on when we play tug, which the Humans think is hilarious. My favorite part, though, is that I have my own yard. Our yard is just a tenth of an acre but we have five trees, a fire pit, hammocks, a private patio, and a grill. 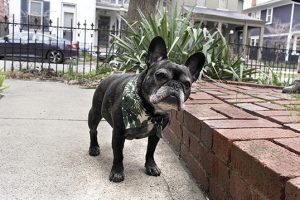 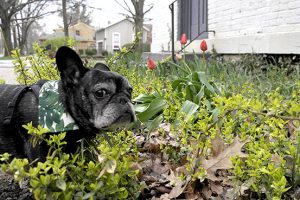 I spend a lot of time outside, soaking up sun and turning sticks into mulch. It’s also a great place to keep an eye on all the neighborhood activity. We have squirrels and birds and the occasional opossum and —once — a whole family of bunnies. And there are all the other neighborhood dogs and cats, plus the mailmen, whom I love the most. My favorite mailman is Ray. He’s my mailman at home and at work, and really (if I’m being honest), he’s my best friend. He gives me treats. I also like the substitute mail persons; I’ve got most of them trained too. Mom keeps a jar filled with snacks behind the counter at work that the mail persons get to give me. Sometimes I have to yelp, or “Frenchie yodel,” if you will, to get their attention. Mom says it’s quite a production. But you know, a girl’s gotta do what a girl’s gotta do. 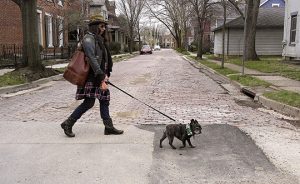 Our favorite thing to do as a family is to walk up to RiverScape MetroPark and high-five the Wright Brothers. It’s been pretty exciting over there since the Water Street apartments opened and all those new dogs moved downtown. Mom and Dad also like that there are loads of free concerts and festivals and beautiful wildlife, including herons and hawks, along the river. Sometimes watching the sunset on the pedestrian bridge is a who’s who of Dayton, with lots of our favorite movers and shakers out appreciating how beautiful our city is. 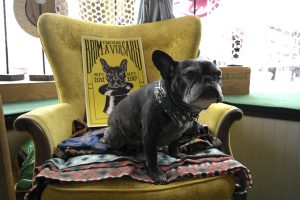 On Sundays we like to visit the dog-friendly patios downtown. I’ve got my Humans well trained; their favorite spots are places they can take me! Some of our favorites in the Oregon District are Deaf Monty’s (named for my friend Monty who couldn’t hear very well and always called me “Gimlets” instead of Guinness), Lily’s Bistro (where my dad bartends on Thursday nights), and Toxic Brew (right across the street from my store, BRIM). When we want to venture a little further, we’ll meet up with my Grammy who just moved downtown and go to Dayton Beer Company where I like to hide in the shade under the picnic tables when it’s hot. 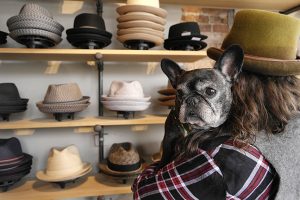 The other thing we really like about living in the Oregon District is that Mom and I have the best commute. Our store, BRIM, is just two-and-a-half blocks from our house, and there are lots of great places to stop and smell the flowers along the way. I have a lot of responsibilities at BRIM. Aside from being Brim mascot (Mom says I’m very popular on Instagram), my responsibilities include greeting customers, entertaining children, sniffing ankles, 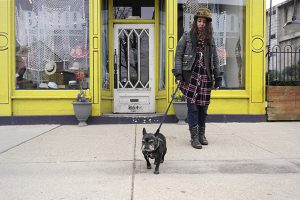 and sharing my hippo or my crinkly blue toy or my Homer Simpson donut with our valued customers. It’s exhausting and I usually need a nap at work. Sometime people interrupt my naps – I mean who does that? I have developed a pretty solid nap strategy: hiding under a blanket. I’m also the primary health and fitness coordinator at Brim. I keep my staff members, Kali and Emily, in shape by chasing them around the center table, and I assist my mom with her upper body strength by demanding that she carry me like a baby. It certainly helps her ability to reach those high shelves to restock hats, sunglasses, scarves, skincare products, and all the other posh items we keep in stock at Brim. 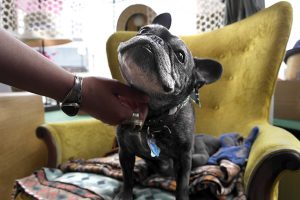 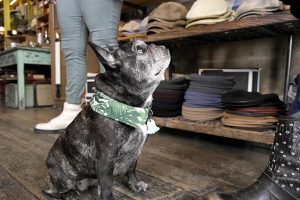 We love living and working in the Oregon District. Lately we’ve been working on Derby Day. It’s our favorite day of the year, and this year it’s the same day as the Downtown Housing Tour! Mom likes it because of the hats — she’s always running outside to take pictures of our fantastically decked out customers. I like it because of the Running of the Wieners and the dog parade — the whole neighborhood goes to the dogs! Right now, we have loads of people stopping by to talk to us about Derby Day. It’s shaping up to be bigger than ever this year with sponsorship from Wagtown and iHeart Radio. Mom says there’s going to be a hotdog-eating contest at Trolley Stop, then the parade, and then the races. My friend, Leslea 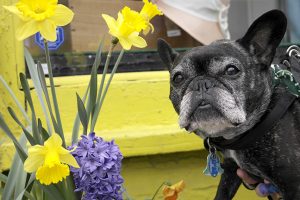 (she always brings me delicious treats so sometimes I’ll do the Frenchie yodel for her, too), is doing a drawing station at Rebel Rebel Tattoo just down the street, and I insisted that we do our painting station for kids again.

As a long-time resident and savvy business dog, I love the live-work-play-nap lifestyle my Oregon District home offers me. It’s convenient, fun, and I’m looking forward to meeting all the new Humans who want to be my neighbor!

See a variety of homes on the free Downtown Housing Tour, 1-5 p.m. Saturday, May 5. For more information about downtown housing options, browse the new online directories. 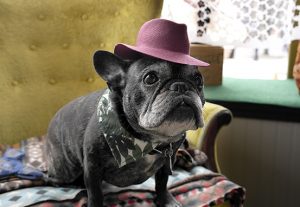 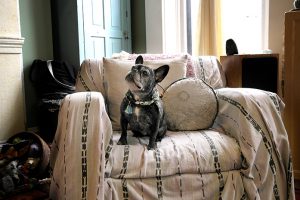 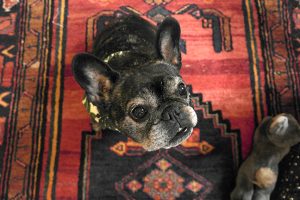 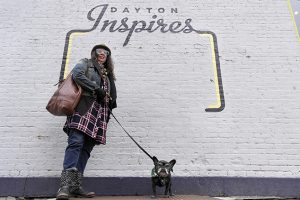