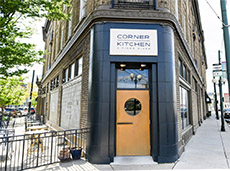 The former owners of Corner Kitchen, the beloved Oregon District restaurant that closed during the covid shutdown, have announced they have sold their business to a restaurant management company that will re-open the space. Dallas-based One Esca Group, which owns restaurants in Ohio and Texas – including The Spaghetti Warehouse in downtown Dayton – intends to own and operate Corner Kitchen under the same name and with some of the same Corner Kitchen menu items Daytonians loved, while also adding to the food and drink menu. Construction to change the interior of the restaurant, located a 613 E. Fifth St., is currently underway, according to the Dayton Daily News, and the former owners are working to transition the liquor permit to the new ownership. An expected opening date of the new Corner Kitchen has not been announced.